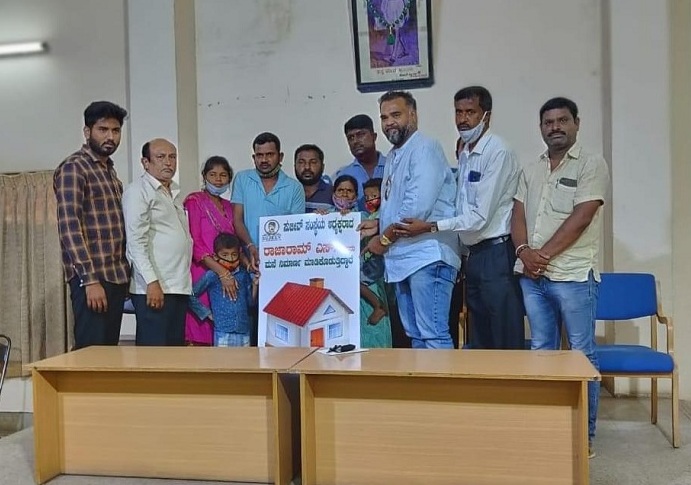 Rajaram Sundaramurthy  is a well-known name in the Mysore District, thanks to his countless contributions in helping the needy and less privileged in the area.

Devamma’s family had literally come to the streets. Everything, including clothes, utensils, and even their ration card had been burnt down in the fire due to the short circuit. Despite asking for assistance from many places, they did not receive any help from anyone for the past one year.

Recently, a month before Rangaswami, son of Devamma met Rajaram Sundaramurthy in Mysore and seeked Rajaram’s help. Rajaram dedicated to help Rangaswami, and he approached MLA Yatindra Siddaramaiah to support the Family.

After the visit to the place and discussion with MLA Yatindra Siddaramaiah ,Rajaram Sundaramurthy decided to help build the house for Devamma’s family.

On Monday, the Pooja was done, and MLA Yatindra Siddaramaiah attended the occasion and praised Rajaram Sundaramurthy for his social responsibility.

The total cost of construction was more than 2 lacs. Rajaram and his foundation successfully helped Rangaswami get him the money needed for the construction of his house.

MLA Yatindra Siddaramaiah was proud to note that recently Rajaram Sundaramurthy has been appointed as Vice President of the Mysore City Congress Committee.

Devammas family also were delighted, and they praised the Sujeev foundation and Rajaram’s help.

“I am highly obliged to Mr. Rajaram Sundaramurthy for helping my Family and me. I was totally devastated financially and mentally after the fire. Rajaram Sir not only helped me with financial compensation, he helped me in securing a job also. Rajaram sir is a very humble and down-to-earth man. He never refuses to help poor people like us.”, says Rangaswami “son of Devamma”

Rajaram Sundaramurthy’s foundation Sujeev is an NGO in India based in Bengaluru, Karnataka. Sujeev aims to fulfill basic needs (food, clothes, and shelter) along with securities for underprivileged children and women.

Sujeev inspires women to develop life-saving skillsets for women so that they can be self-dependent and encourages children to pursue education. Who needs help can contact us at rajaram@sujeev.org

Rajaram is considered nothing less than a messiah for the needy